On 26th January 1788, the First Fleet of convict ships from Great Britain, led by Captain Arthur Phillip, arrived in Australia and the Union Jack was raised at Sydney Cove. Today the 26th of January is known as Australia Day which is a day that celebrates Australia’s diverse society, achievements, what’s great about being an Australian citizen and Australia’s past and bright future.

Across Australia, people get together with their family and friends or attend an organised event in their community to celebrate their national day. I decided to celebrate Australia Day with my mum who has spent the last couple weeks visiting me from the UK.  We travelled down to Circular Quay and stood right in front of the Sydney Opera House to witness the Salute to Australia.

This started off with an Aboriginal welcome to the land and then followed on with the traditional smoking ceremony where native plants are burnt to create smoke which is supposed to ward off evil spirits, acknowledge the aboriginal ancestors and pay respect to the land. Then songs were performed by choirs around the harbour and comments were said from the newest Australians who received citizenship this year.  Afterwards, 21 gunshots sounded and the Australian Army, Royal Australian Navy and Royal Australian Air Force conducted a salute. The National Anthem was sung; I didn’t know any of the words of course but the atmosphere was amazing and I almost felt like an honorary Australian. 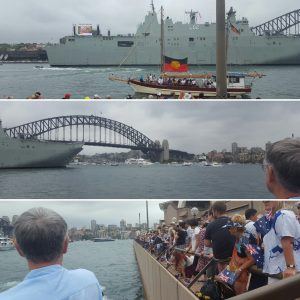 Pictures taken from in front of the Sydney Opera House

In the evening, we went to our local community organised event at a nearby park. The festivities were already in full swing by the time we arrived. The park was full with families as they enjoyed snacks from the food stalls, kids were entertained by the many amusement park rides and a rock band was providing the tunes. At 9 pm we counted down for the fireworks display which was amazing and it was the first time I’ve witnessed a fireworks display up close. 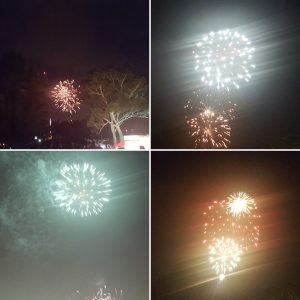 My fantastic pictures of the Fireworks Display at North Ryde Common

All in all, I really enjoyed Australia day and I’m happy I got to witness the festivities and be a part of it.