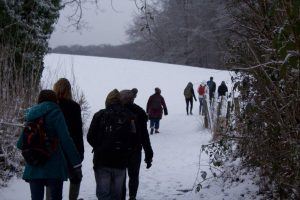 The new little town that I have added to my list of visited Dutch places is Vaals, also known as Drielandenpunt (“three country point”) in Dutch, Dreiländereck (“three country corner”) in German, or Trois Frontières (“three borders”) in French. This is the town where three different countries – the Netherlands, Belgium and Germany- meet, and it is also the place that hosts the highest hill in the Netherlands, the Vaalserberg. The town was not necessarily on my ‘to see’ list, but was chosen by the managers of the InnBetween, Maastricht University’s chaplaincy, as a place for the student team day out. Being part of the student board, I happily joined my team for this little trip. 🙂

The bus from Maastricht to Vaals took only about 45 minutes, but by the time we got there, it almost seemed we are in a very, very far away place. Unlike Maastricht, Vaals was covered in a beautiful layer of snow. In the centre of the town laid the Sint-Pauluskerk, a Roman Catholic church, built in neogothic style, in the 19th century. The town itself was really small, but had the charm of little places. It felt really cozy to be there, the people on the streets seemed to be a bit happier and not constantly rushing to get somewhere like they do in big cities, and the general vibe of the town reminded me a bit of Valkenburg, the magic town with caves that I have previously written about.

To challenge ourselves, we have decided to go on a hike, in the snow, on the hills surrounding the city. The views were stunning! From the top of Vaalserberg, one could see a huge valley  covered in sparkling snow, whilst the few buildings of Vaals seem to have gathered together in the centre of it, trying to keep each other warm. A bit further in the horizon, you could spot the buildings of Aachen, a famous German city. It felt so amazing to know that only by taking a few steps further, you could be in a different country. It was really cold, but we had so much fun making snow angels, having snowball fights and just chatting to each other and enjoying some quality time together.

All in all, a very successful day! 🙂