An Explosive Start to the New Semester

A couple of weeks ago it was time for me to finally get back to doing work after almost 3 months off. The new semester (and the new academic year here) doesn’t officially start for another week, but geology students often have field trips out of term time in order to fit them in around other courses. My first field trip of 3 this semester was a volcanology trip in the Taupo Volcanic Zone (or TVZ for short) in the Central North Island. We were based at Mount Ruapehu, a large stratovolcano which is the highest point on the North Island and the southern boundary of the TVZ, staying in a ski lodge as it’s not the ski season at the moment.

On the first day we walked the Tongariro Crossing, this time in much better weather than when I did it the first time. There was barely a cloud in the sky, which combined with the fact it was a long weekend meant that the track was very busy. Thankfully we were kitted out with hi-viz vests so we didn’t get mixed up with the hoards of walkers. As we walked over the crossing we stopped at lots of places to look at key parts of the Tongariro Complex, including craters and lava flows produced by various eruptions and saw the impacts of the 2012 Te Maari crater eruption. 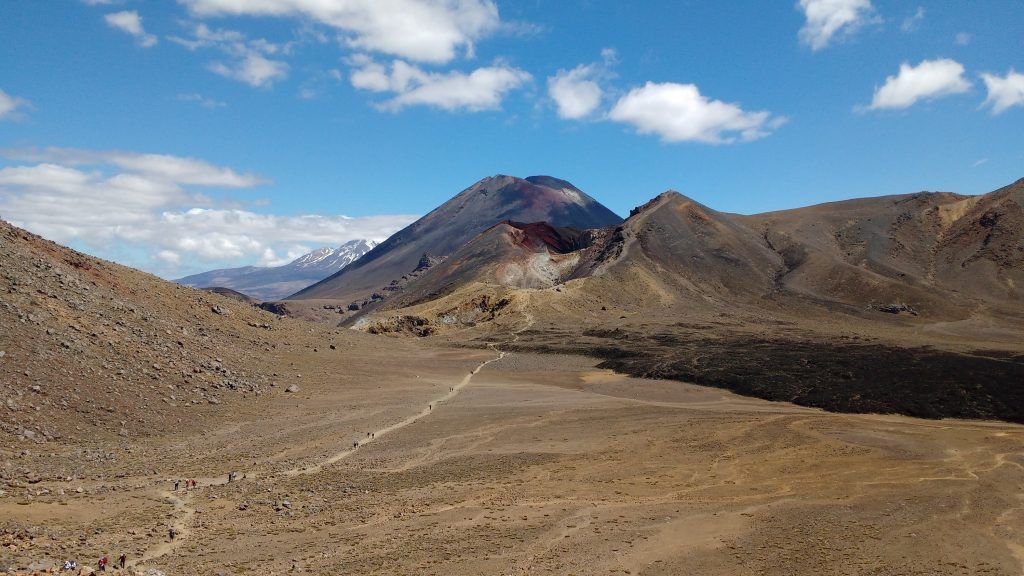 Red Crater and Mount Ngauruhoe (a.k.a. Mount Doom) with Mount Ruapehu in the background

The next day was spent studying Mount Ruapehu, looking at deposits produced by different volcanic processes including lava flows and debris avalanches in order to piece together the evolution of the volcano over the last 300,000 years. In the morning we had lots of walking between outcrops but thankfully the lecturers were feeling kind in the afternoon and let us take the chairlift up to study Pinnacle Ridge, the highest spot we visited, rather than walking up to it. 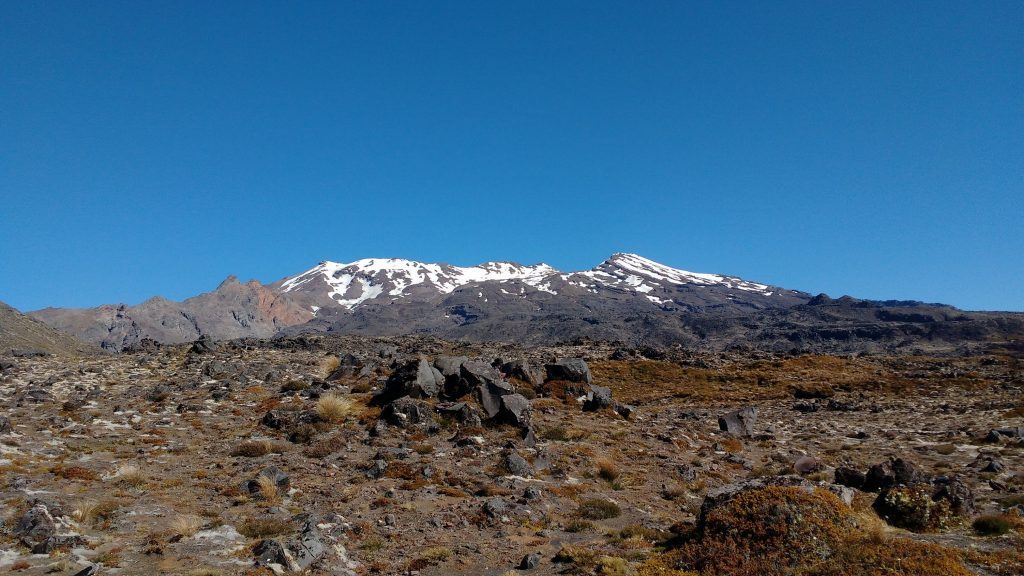 On the third day we visited several roadside locations to look at deposits produced by a range of volcanic processes and compare the characteristics of each deposit. We looked at ashfall deposits and pyroclastic flow deposits from several eruptions of volcanoes in the area and practised describing these deposits in the field.

On day 4 we visited Taupo, where we looked at Lake Taupo which fills the caldera of the Taupo Volcano. Taupo has had several large eruptions, with the most recent major eruption taking place 1800 years ago. Next we visited the GNS Science Wairakei Research Centre and met some of the volcanology team who monitor all of New Zealand’s volcanoes for changes in activity. Afterwards we went to the Aratiatia Rapids, where water is released from a dam 3 or 4 times a day sending an impressive torrent down the river gorge below. After watching the release of the water we looked at an old lava dome, before heading to a geothermal power station to learn about how the geothermal energy is used to generate power. Finally, we ended the day by testing the geothermal water with a relaxing swim in the hot river at Taupo’s Spa Park. 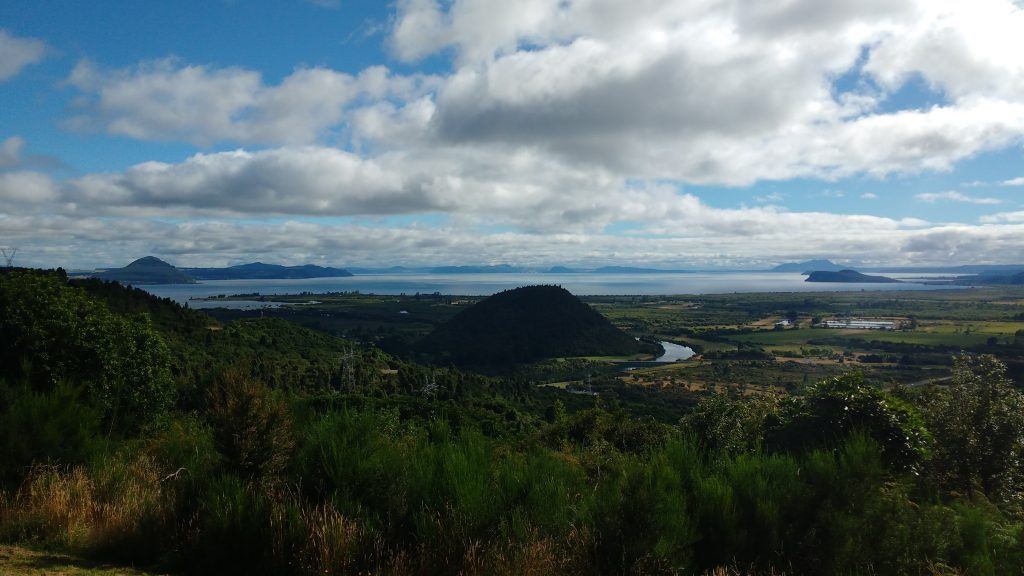 We returned to the Tongariro Crossing on the fifth day, this time to map the lava flows and pyroclastic flows that have erupted from Mount Ngauruhoe over the years, most recently in 1975. The weather for this day was the worst so far, with the blue skies we had been treated with for the first 4 days replaced by thick cloud cover which meant for most of the day we couldn’t see the volcano whose products we were mapping. It was quite a challenging exercise because the lava flows from different eruptions all looked similar making it hard to tell them apart.

The last 2 days of the trip were spent on a computer simulation of a series of eruptions from the Tongariro Complex. We were briefed about how the simulation would work and everyone was allocated a role for the simulation and we had time on the day before to research and prepare for our role before the next day. Half of the group were in the scientists team, responsible for collecting and monitoring a wide array of data from the volcano whilst the other half were in the emergency management team, tasked with dealing with the effects of the eruptions on the public. I was allocated to the volcanic ash specialists team and it was our job to plot maps of the ashfall from each eruption, based on the height of the plume and the wind conditions at the time in order to aid the emergency management team in planning evacuations and infrastructure closures. The next day it was time for the simulation, which was very fast paced. The simulation ran for about 4 months which was condensed into around 4 hours meaning were in a very pressurised situation to monitor the volcano, deal with the eruptions and provide information to the public. I really enjoyed the simulation as it gave us a chance to experience what volcanologists go through when dealing with volcanic unrest. 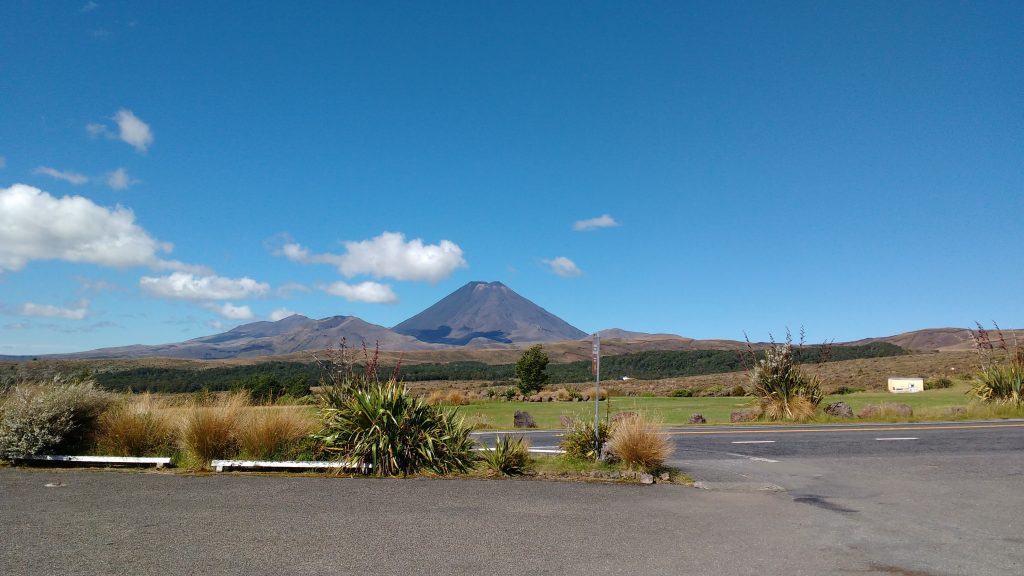 Studying geology gives lots of opportunities to travel to amazing places. I love fieldwork because it allows you to go and see what you learn about in lectures for real which often makes concepts much easier to understand. It’s also a great opportunity to get out an explore new places, which is why I’m taking as many field courses as possible this semester. As you’re reading this post I’m already on my next trip, look out for my next blog post to find out all about it!