Studying abroad is not just about studying, but also about exploring a new culture and travelling around a  new country. When I arrived in the Netherlands, I promised myself that in these 10 months of my ERASMUS programme I will visit all the really beautiful/famous places that are worth visiting on the Dutch European land (I say European because yes, I would love to visit Aruba as well, but it is not really feasible at the moment 😀 ). However, when I was thinking about that, cities like the Hague and Amsterdam came to  my mind, but I have never thought about Gouda. 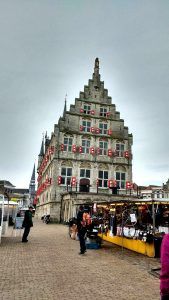 Gouda, a town situated in the South Holland province, really surprised me last weekend, when I took a day trip there. I can only describe it as a lost tiny jewellry, which reflects the Dutch spirit better than any other place I have visited. Gouda’s beauty emanates from its small streets and charming canals, its beautiful Gothic buildings, its always-smiling people and its overall miniature-town aspect.

In the town centre stands Gouda’s magnificent Standhuis (City Hall), one of the oldest Gothic town halls in the Netherlands, built in the 15th century. The building has a very distinguishable aspect, with an imposing, yet fine structure, tiny red-white windows and little towers decorating its upper part, which makes it resemble a mini-fairytale castle. The Standhuis is placed right next to the city’s Markt, which is, of course, famous for selling a lot of good cheese!

The Gouda cheese is the typical Dutch yellow cheese made from cow milk. The name “Gouda cheese” was used initially to refer to a particular type of cheese made in this region, but its popularity led to it being used today to describe all the types of cheese produced in the Dutch traditional manner. Every Thursday morning, Gouda hosts one of the most famous cheese markets in the world. It is a tradition strongly embodied in the Dutch culture and history, whose meaning is kept today by continuing cheese selling activity in front of the Waag, an old cheese weighting house, which is today a small cheese museum. Of course, the Markt is not the only place where you can get cheese from. The town is full of small cheese shops where you can buy all sorts of cheese, from the classic Brie to various sortiments of Blue cheese.

Although I love cheese truly, madly, deeply, my favourite place in Gouda was not the Markt, nor any of the cheese shops. Instead, my heart was conquered by the grandiose beauty of the Sint Janskerk, which is one of the most beautiful cathedrals I have visited so far (topped maybe only by the Sainte-Chapelle church in Paris). The cathedral was built in the 15th century, follows the Gothic architectural style and it is huge! It is the longest church in the Netherlands and it has been included on the UNESCO list of Dutch monuments. What is really special about it, though, is the fact it hosts some of the most impressive stained glass windows ever seen, painted in the 16th and 17th century. As a fan of stained glass, you can imagine how I felt inside the cathedral – like a kid who is overwhelmed by how many toys he is surrounded by and cannot decide which one to play with. I walked slowly through the cathedral, trying to capture each detail of each window, a mission which proved almost impossible since the windows were so “alive”, painted with bright colours, showing stories long-ago forgotten and encrypting keys to those stories in little symbols that were hidden in all their corners. I was simply fascinated by this place!

The rest of the day was spent just wandering around the city, trying to reach two parts of the city where two old-style windmills could be seen (to make me feel like I am truly Dutch 😀 ) and making a new friend, a fluffy black-and-white cat, which has “guided” me and my friends around the city and whom we have named, in a total lack of creativity, the Gouda cat.

All in all, this was another successful journey. If you visit the Netherlands, definitely get to Gouda!!  It is a gorgeous little town, which I am sure you will love just as much as I did! 🙂 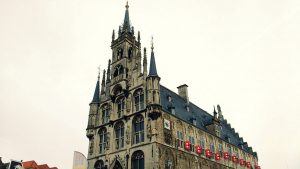