Bangkok had a totally different vibe to Phuket. Immediately you could feel the city vibe; no one had time for you or paid you any attention. If you wanted a taxi, you had to go find one, they didn’t find you. We didn’t quite have the best start to our stay in Bangkok; first the taxi driver couldn’t find our hotel and finally admitted he didn’t know where he was going so we literally had to stop near a 7/11 just to use their Wi-Fi. Then we arrived at our hotel (Resort M – would not recommend!), it looked nothing like the pictures and the room we booked wasn’t available – apparently they tried to contact us. In the end, they gave us another room which was bigger but the room was nowhere near as nice as our room in the hotel in Phuket. Plus, the room had so many mosquitos and I ended up getting bitten on the edge of my eye which caused my whole eye swelled up. It wasn’t pretty.

I think we struggled with finding things to do in Bangkok more than we did in Phuket. On our first day, we looked around the area and all we could find was a supermarket and an outdoor market that didn’t smell too great and all the clothes and shoes looked worn.  On day 2 we took a mini road trip to the Vana Nava Hua Hin Water Jungle in a taxi with the “swaggiest” taxi driver named Joe. The water park was really fun, we paid around $5 extra to get a towel, lunch, a drink and a photo with our ticket. The park happened to be mostly empty so we didn’t have to queue for rides. The stairs we had to climb for the rides were insane though. I’ve never felt so unfit.

On our final day, we used the train for the first time which was really interesting. They had a system where you had to queue in a certain place for a certain entrance of the carriage which was really efficient. The trains also had a map which lights up so you could see which stop you were at and which direction you were going in. I really liked using the trains in Bangkok and apart from the ticket system (you could only buy a one-way ticket and in some stations you could only pay in coins), I think the Tube in London could learn a thing or two. We were supposed to go sightseeing on our final day after checking out the huge shopping centre (which literally had its own waterfall) but in the end, we went to the weekend market in Mo Chit which was huge! I’m not really a market person so I only bought a few things. Most of the time I was complaining about my feet hurting while my friends were bouncing from shop to shop. We were at the market for several hours until it closed. 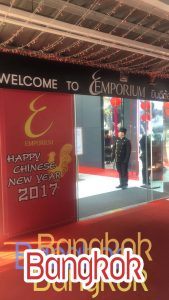 The Shopping Centre in Bangkok 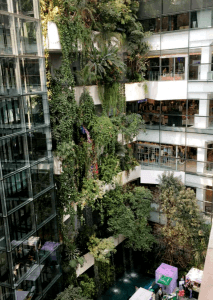 The Waterfall in the Shopping Centre

Later that night we went to try the night life in Bangkok but we didn’t get very far. We ended up going to a Hip Hop club that allowed rappers to freestyle to the beat while amazing dancers showed off their moves. The vibe was really cool and the energy was contagious. We ended up staying there for longer than we thought and met some really cool people.

After that night it was time to leave our hotel and get ready for our flight in the evening. We were hoping that we could squeeze in a cheeky massage before we leave since our flight wasn’t until 7 PM but because we had a little disagreement with the hotel regarding payment and money that was owed to us, we were kicked out of our hotel, luckily after checkout, and had to carry our luggage with us until we went to the airport.

Though it wasn’t a great ending to our trip, I really enjoyed Thailand and I’m glad I got to experience Phuket, Bangkok and the Phi Phi islands and enjoy all their differences.

‘Kapunka’ means ‘thank you’ in Thai