My travelling adventure in the Netherlands continues with the famous city of Rotterdam. Second biggest city in the Netherlands, both in terms of its territory and  population, Rotterdam is famous for being Europe’s largest port. It is a city that combines the old with the new, in a nice way, although I must confess there were too many modern elements for me to love it more (not a big fan of skyscrapers). But there is no blame to put on it, given that during World War II the city was completely destroyed, and the way it rose from the ashes, hereby in a completely new form, is truly impressive.

The first stop in Rotterdam was the train station itself. The station hall is huge, made of glass and wood, and it is also very distinguishable: at the entrance, one of the corners of the building expands to give rise to an iconic shape (it is hard to describe it, but let’s say, from underneath, it reminded me of the poster for the movie”Jaws”).

The first steps into the city led me and my friends to the Stadhuis, a beautiful building built in the 1920s, which hosts the town hall, and it is one of the few buildings to have survived the bombardment of 1940.

The next stop was the beautiful Markethal, a horseshoe-shaped building, which apart from hosting an indoor market, hence the name, is also used for providing housing. The various images that are projected on the inside give the building a magical vibe, whilst the imposing structure and the numerous, symmetric windows on the outside speak of modernity in its highest form. On our way there, we have also had a chance to spot the famous cubic houses of the architect Piet Blom.

Perhaps my favourite part of the trip was our stop in The Park. And I call it The Park because it officially 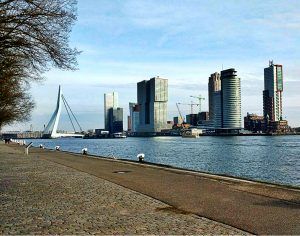 has no name. Although it is the most famous park in Rotterdam, this park has gained some sort of official reference only after the Euromast observation tower was built in it. The Euromast itself did not speak to me too much, although I must confess it must be because I chose not to climb up on it and get a view of the city from above. The park, on the other hand, was quite beautiful and there were plenty of observation points. Me and my friends chose one quite close to the Erasmus bridge, from where you could see not only the bridge, but so many incredible skyscrapers, including the famous De Rotterdam building. As you might know by now, I am not a fan of new, modern architecture, but I must confess the view over the city was worthwhile.

On the way back to the station, we passed through the borough of Delfshaven, one of the areas of the cities that maintained its historic vibe. The beautiful canal houses host lots of cosy shops selling antiques, as well as restaurants with waterside dinning areas.

Rotterdam was not really one of those cities that I fall in love with, but it is worth visiting. And if you admire modern architecture, then it will definitely appeal to you more than it did to me! 🙂