When you think of Australia there are probably a few things that spring to mind: wildlife – both good (kangaroos and koalas) and bad (spiders and snakes); the Sydney Opera House, the Outback, sunshine, and barbecues. Sport is also something that people associate with Australia, and I’ve always thought of surfing as a quintessentially Australian thing to do, so it was one of the first things to go on my Australian bucket list (I had that song stuck in my head the day we went). And I’m pleased to say that I’ve officially ticked it off the list!

Now it’s confession time first: I actually surfed in New Zealand over the break first so my first surfing experience wasn’t in Australia, but I was still determined to get that authentic Aussie experience. I did it with a couple of friends down at Manly beach in Sydney known for being a good surf beach, but we were doing it through the exchange society (check here for my post on the perks of joining an exchange society). So everything was organised for us which always makes life easier.

We got down there early in the morning, but it was still pretty busy with surfers, stand-up paddleboarders, volleyball players, runners… (Australia is a very active country). At the surf school were all given wetsuits, rash vests, and a board (beginners’ boards which are bigger which makes them more stable and easier to use). We started off on the beach and our instructor spent some time talking us through the board, showing us a couple of techniques to get yourself from lying down to standing, and also talking us through safety – how to avoid crashing into people, where the rip tide is and how to get yourself out if you’re caught in it, how not to hold the board to avoid knocking yourself out with it – all that good stuff. We were then released into the water to take on the waves. Because we were all beginners we were staying in the area where the waves broke, and then surfing on the white foamy bits of water (hopefully you know what I mean). So whilst this makes surfing easier, it also makes it more difficult…

Now the thing I have learnt with surfing is that it’s hard. And I don’t just mean standing on the board and not falling off is hard, everything is hard! We were all battered by these big waves that were breaking around us, and every so often they were powerful enough to knock me over, I’d lose my grip on my surfboard, and it would go off in some direction and I’d be dragged with it (whilst still underwater) because it was attached to my foot. And then I’d resurface, look around and see I was pretty much all the way back at the shore, and then have to start my battle with the waves to get back out far enough. So it’s definitely a test of perseverance and strength because it’s physically exhausting carrying and manoeuvring the board and also battling the waves.

But when you persevere and manage to catch a wave, it’s all worth it. Some waves I managed to get up and then fell straight back off, but there were some waves that I managed to actually surf! I was a better surfer in New Zealand where I caught about six or seven waves (beginner’s luck?) whereas in Australia I only caught about three (beginner’s luck wearing off?). But that feeling of actually standing on the board, being able to control it and where it’s going, and then hopping gracefully off at the end is so good, and I can see why people love surfing!

We were in the water for about an hour, and we all got a good go and taking on the waves and most people in the class had managed to stand on the board by the end. When the lesson was over and we got out, I did realised how drained I was, and I really wasn’t expecting that. My arms hurt for a good few days afterwards (even putting my hair up was a challenge) but it was so worth it – I had a great time, managed to surf at one of Sydney’s best surf beaches, and ticked something off my bucket list. The kind of experience that doing a year abroad is all about. 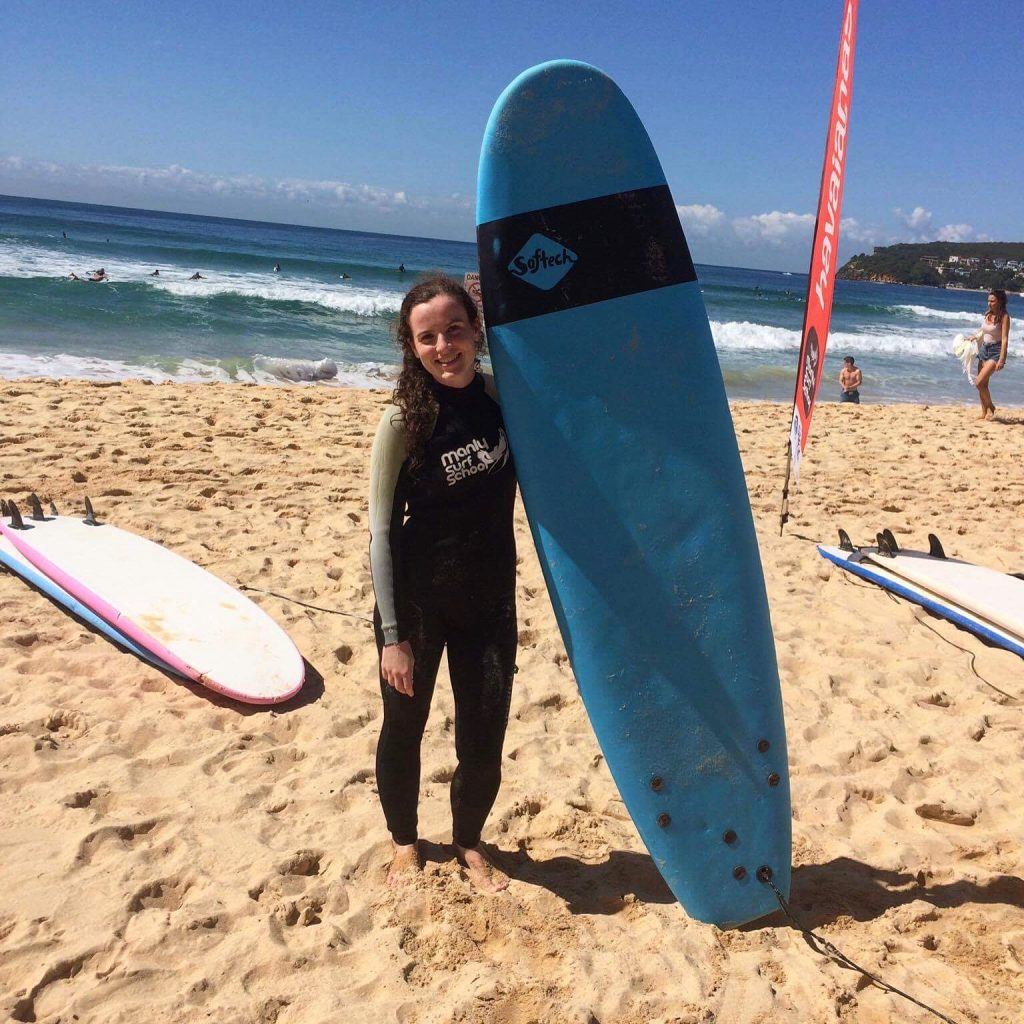