Even if you don’t know much about Australia, you’ve probably heard of the Outback – the arid and semi-arid deserts of Australia that take up 70% of the country. Living in Sydney, where it rained for days on end earlier this year, and having visited the world’s oldest rainforest in Queensland, it’s hard to believe that Australia is one of the driest countries on earth. But the Outback is a defining feature of Australia and a place that I was really keen to visit at some point whilst I was here – the time has finally come.

I had an image of what to expect in the Outback – completely flat, miles and miles of red dust stretching as far as the eye could see, a few plants here and there, and more kangaroos than you can shake a stick at. Turns out I was pretty wrong. It is fairly flat, save for the odd hill and impressive geological features like Uluru and Kata Tjuta (more on those in my next post) but whilst the soil is an amazing red colour a lot of it is hidden under plants and trees. All these plants have developed strategies to survive in such a dry area – they can get by on very little water and when rain does come a lot of them have water storage capabilities so they can survive the year. They are also quite small and generally low lying so they need less water and the water doesn’t have to travel as far to get to the highest leaves and branches. But these plants mean that the Outback isn’t the expanse of red dust I thought it was – it’s far greener than I thought it would be. And all the plants and grasses mean it’s great camouflage for kangaroos – we didn’t see a single one during our four days out there. 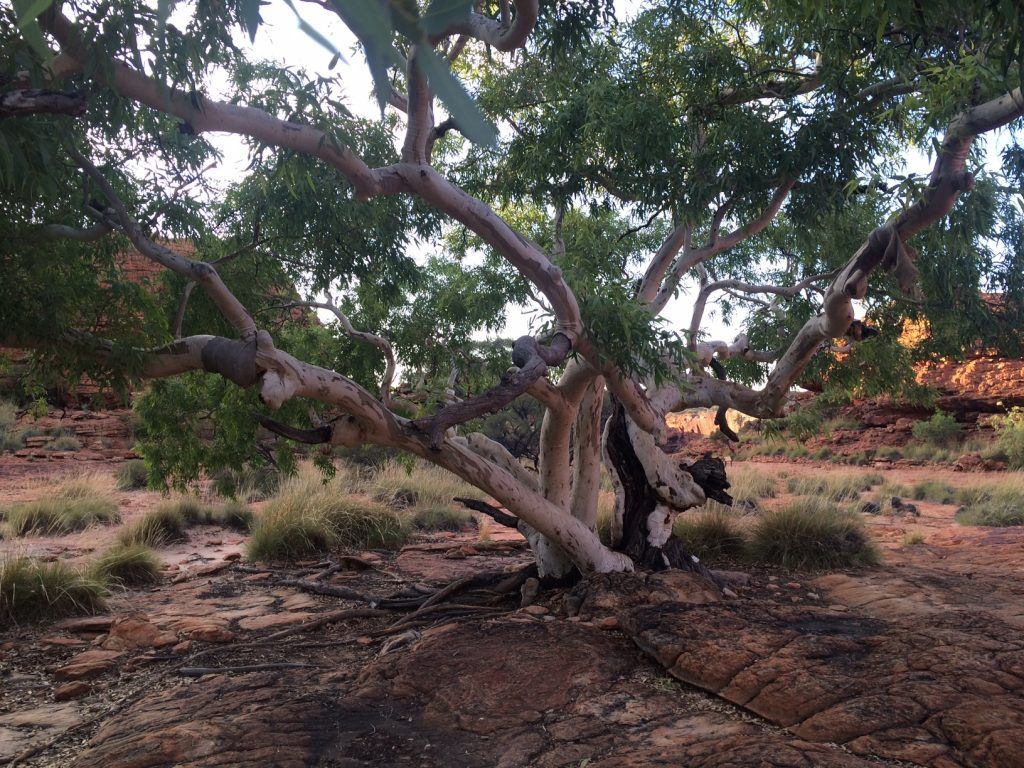 What’s known as The Ghost Tree due to its white colour. It’s managed to make its home in the smallest of cracks in the rock and survives on very little water. When it’s not got enough water, it decides which branches are the least useful and cuts off water supply to that branch so it dies and falls off. You can also rub the bark and a white powder will come off which you can apply to your skin and use as sunscreen – it’s not as effective as what you can buy from a pharmacy, but has been used by Aboriginal Australians for thousands of years

Whilst driving in the Outback you realise how inhospitable it is – roads stretch for hundreds of miles with no signs of human life, the soil isn’t of a very good quality for crop growth and it experiences temperature extremes. Peak summer days are often around 45C and the coldest winter nights will drop to about -10C. Many people consider it a place with no second chances – a mistake like getting lost with no water or food can be deadly as there’s no shade due to the low-lying plants and very few natural freshwater sources. But despite this, Aboriginal Australians have survived (and thrived) in the Outback for thousands of years. They know where to get water from, they know what plants are edible or have medicinal qualities, they also know how to make weapons for hunting and which plants are best for this – the tree sap can be boiled down to produce glue, the poisonous tree which can be used to make a spear head, and the vine that is incredible strong and can be used for the handle of the spear. They can also understand the turn of the seasons, the movement of the sun, and the migration movements of certain animals, and use all these to work out the best place for hunting at different times of year, or when fruit and berries are ready for harvesting. 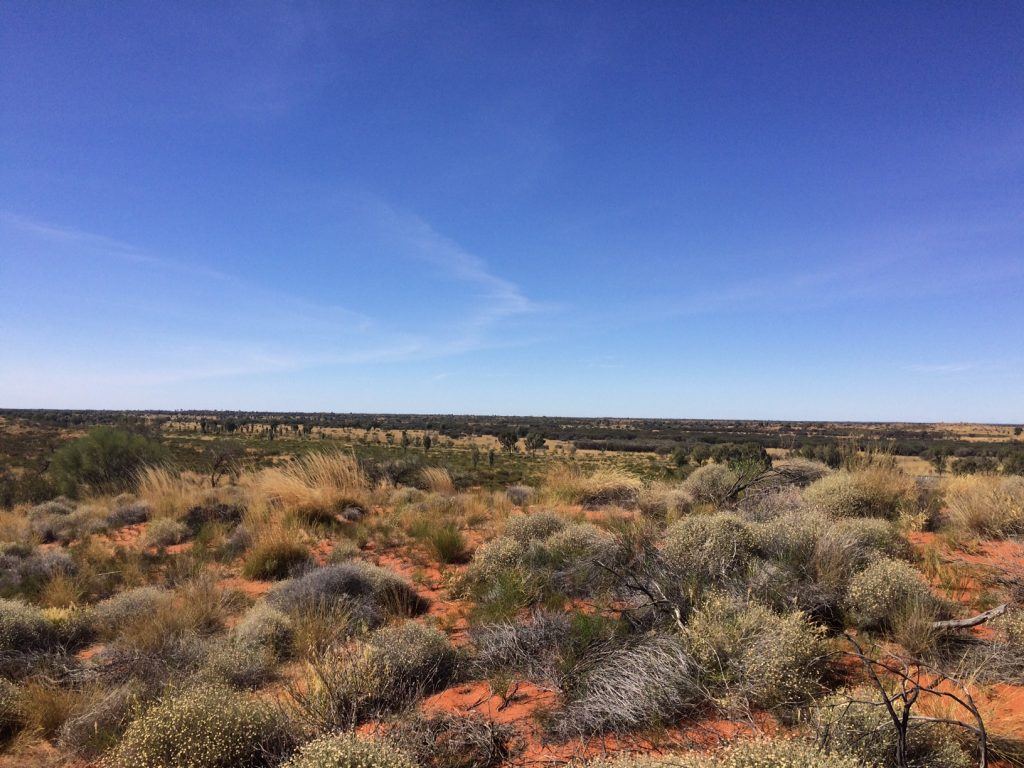 But one of the main reasons they have survived for so long is because they are incredibly sustainable – they have been completely dependent on the land and know that hunting something to extinction or over harvesting a plant could be detrimental to their survival. Witchety grubs grow in the root systems of certain plants, and rather than digging up the whole plant they would only cut out a fraction so that the plant would regrow and continue to provide food, they only hunt one kangaroo at a time because one kangaroo is sufficient food for a while and storing it is difficult, and when fishing they are only careful to take what they need knowing that there will be other people further downstream needing to fish as well.

As a geographer, I found both the physical and human features of the Outback amazing – I’d never travelled to an environment quite like the Outback before, and I’ve found the Aboriginal culture and story of survival amazing, so it was fascinating to hear more about it and finally be able to understand just how impressive their survival skills are in such a difficult landscape. I’m really pleased I went and can’t wait to tell you a little more about my trip and what else I saw in my next post.