Learning to Kayak in a Week

This semester I decided to try something new and push myself out of my comfort zone a bit, so I joined the University of Canterbury Canoe Club (UCCC or U Triple C for short). Despite the name the club mainly does whitewater kayaking. I’ve kayaked on calm lakes and  the sea before, but until last weekend I’d never tried kayaking on a whitewater river. However last week I took part in Zero2Hero, a weekend to get beginners up to speed with whitewater kayaking. The trip consisted of 2 evening sessions during the week, followed by an action packed weekend on a Grade 2 river (the scale goes up to Grade 5 with anything impossible graded 6) .

First of all we had a pool training session, aimed at getting familiar with being in a kayak and what to do if you end up underwater. Doing this in a swimming pool has the major advantage that the water isn’t cold or fast flowing. Learning how to cope with being upside down underwater proved to be very useful during the weekend, but more on that later.

Next on the agenda was a lake session later in the week to learn and practise different paddle strokes, as well as practising how to turn and how to keep going in a straight line (which is surprisingly difficult). Before getting out of the lake we had another practise at flipping upside down, this time in much colder water.

Early on Saturday morning 30 tired-looking kayakers gathered at the club gear shed to load kayaks onto a trailer and car roofs before piling into heavily loaded cars and heading off to the Hurunui River for day 1 on the river. We split into small groups, each with a leader and a second to guide us down the river and share their knowledge with us beginners. After getting kitted up with thermals and wetsuits to keep warm as the river is getting cold as we come into winter, a spray skirt to stop water filling up the kayak, a buoyancy aid to stay afloat in the water and a helmet as protection from rocks in the river, we hit the water with a mix of excitement and nerves.

First of all we learnt how to paddle across the river without ending up really far downstream (known as ferry gliding) and how to move between the main flow and an eddy (an area of water behind a rock where the flow is calmer than the main current of the river). Whilst doing this I managed my first 2 flips of the day, but thankfully the practice earlier in the week paid off and I held my breath underwater until someone could roll back the right way up. Then we set off down the river for a fun-filled few hours of paddling various rapids. I racked up 3 or 4 more flips and managed to get wedged on a rock in the middle of the river but by the end of the day I noticed an improvement in my paddling skills. Exhausted and aching all over, we got out of the river, got into dry clothes and headed to Lake Taylor, our campsite for the night. After setting up camp we enjoyed a BBQ and a campfire with drinks aplenty, then headed to sleep in preparation for another day on the river.

The following morning we woke to the beautiful sight of the lake emerging from the clouds. We enjoyed bacon sandwiches for breakfast then packed up and returned to the Hurunui for day 2 of paddling. 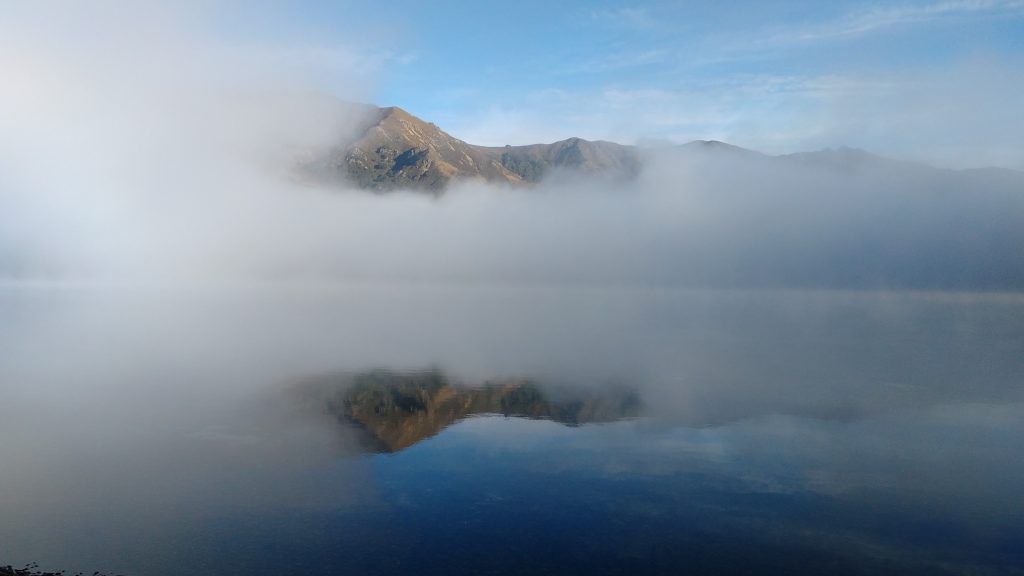 Lake Taylor in the morning mist

We headed down the same stretch of river as the previous day, although this time it seemed a bit easier and I managed to stay the right way up the whole way. We’d started earlier in the morning than the day before, so we continued further down the river which had some slightly more challenging rapids. I ended up capsizing once after trying to avoid one rock and hitting another side on, but thankfully it was just before the end of the day so I didn’t have to stay cold and wet for very long. We loaded up the cars and headed back to Christchurch after a very fun but exhausting weekend. I enjoyed experiencing whitewater kayaking for the first time, but I’m no expert and still have a lot of room for improvement! Whitewater kayaking is totally different beast to the canoeing and kayaking I’ve done before and requires a lot more physical and mental effort, but is thoroughly enjoyable.