I apologise for not having posted in a long time, but the past couple of weeks have just been crazy here, in the land of the windmills. Exams for some 3 of the hardest courses I have taken this year are waiting for me at the beginning of June, I need to find accommodation in London for the summer and to prepare for starting two new jobs – and all these whilst dealing with a huge wave of melancholia coming from the realisation that my Erasmus is soon coming to an end.

But the last weekend has been a good one – I have decided to forget about everything that worried me and all the work that I needed to do and I have finally took the time to visit Liege, the well-known Belgian city, that is just a 40 minutes train journey away from Maastricht. So I warn you, this post is going to contain numerous references to how much I love French, waffles and Belgian chocolate! <3

I visited Liege with a good friend of mine. Our trip started with a cheerful group of Dutch, who were heading Brussels to celebrate a birthday. The short train journey, thus, was very festive, filled with laughter, and attempts of hands gestures communication between me and my friend and the Dutch group, that eventually ended with us being treated to some nice spring rolls.

Once we said goodbye to our trip buddies, and stepped out of the train, we were surprised by the train station itself. The Liège-Guillemins railway station can be described as a modern, white, skeleton-like structure, which impressed us maybe not because of its imposing style, but because of its openness – a huge hub, that sees over 15 000 travelers daily, built to the south of coeur du Liege.

The first stop after the station was the Cathedral Saint Paul de Liege, a beautiful building dating as far back in time as the 10th century, which on the inside wears its beautiful jewelries in the form of stunning stained glass, and on the outside wears the marks of time. This was the first, but not the only gorgeous cathedral that we got to see in Liege. The Collegiate Church of St. Bartholomew, recognisable by its red and white towers, treated us to a somewhat new picture. The interior and exterior of the cathedral have been recently restored, and some of the people who participated in this process are those running the church today. You can tell that simply by looking at the sparkle in their eyes, the welcoming gestures and the pride that they take in talking about the cathedral and showing you around. The interior of the cathedral is modern and has a very neat aspect, given by its immaculate walls.

Next on our list of places to see in Liege was Le Palais des Princes-Eveques, a historic building, whose fortifications were built about 1000 CE by Bishop Notger. The building used to face the monumental Cathedral de Saint-Lambert, which was unfortunately destroyed later on. At the present, the building is occupied by the provincial services of Liège and the Palais de Justice. 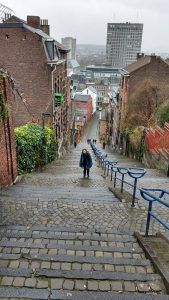 The last place we visited that really stood out was Montagne de Bueren. This is a 374-steps staircase, built in 1881 to honour the 600 soldiers who died in a battle between Vincent de Bueren, who defended Liege, and Charles the Bold. The staircase was ranked many times as one of the most extreme staircases in the world. When we finally climbed up all those stairs, we were hit by the amazing beauty of the view – all the city could be seen from above! Near Montagne de Bueren there is also a beautiful forest, that we explored for a while.

I am sure by now I have convinced you already that Liege is worth visiting. But just in case I didn’t I want to mention that the true highlights of the day were really the amazing waffles we had in the city center (we were in Belgium- we simply could not skip this!). My choice was a strawberry waffle with lots of chocolate on top – best decision ever made!

So all in all, if you study in Maastricht, Belgium, Aachen or anywhere else close, don’t miss out on visiting this amazing city. 🙂