My First Sports Game Ever

I remember in year 10 for my controlled assessment, we were asked to write a short rant called “Don’t Get Me Started.” I remember writing about how people are obsessed with watching sports – specifically football – and how I didn’t really understand how people can sit and watch a game for hours, yelling at the players who can’t even hear them and get so emotionally invested in a team that you start referring to them as ‘we’ even though you are not on the team. Then last Friday I ate my own words.

I watched my first sports match ever when I went to see the Sydney Swans v The Hawks on Friday at an Australian Rules Football game. Even though I’m not really into watching sports, I thought it was necessary to go because I probably won’t be able to watch an Australian Rules game anywhere else so I definitely wanted to see one before I left indefinitely. Usually, when I attempt to watch a (British) football match on TV I get bored quite quickly and don’t quite follow what’s happening, so I expected the same thing when I went to see the Australian Rules game on Friday. I assumed I would just look to other Swans fans to see which reaction I should be faking and constantly asking my friends what going on.

When I first arrived at the stadium, the place was buzzing. There were stalls selling merchandise and men in army uniform playing “Thrift Shop” by Macklemore & Ryan Lewis, using instruments while a person dressed up in a costume danced to the music. It was quite the show. Once we had found our seats (by right of one of the goals, bay 14 middle row), we grabbed some food because we were starving. The food served at the stadium was good but severely overpriced – I would definitely recommend eating before you go just to save some money.

I had so much fun at the game.  If you’re able to watch an Australian Rules game in Australia I would definitely do it. The game itself is not hard to understand, I went in barely knowing the rules of the game (look to Kitty’s post for more info on the rules) and I understood what was going on pretty quickly. For the first half of the game, the Hawks were kicking our butts. The Swans were losing badly and I started to lose hope in the game. After the first quarter the Swans picked up and I found myself cheering wildly when they scored and naturally standing with the crowd when things got intense and the ball was so close to the goal. I even yelled at the players when they made a mistake even though they couldn’t hear me (did someone say hypocrite?) I even made friends with the couple behind me who had entertaining one-liners and supported me during halftime when we had to wave the Citi ad on the back of our clap banners (which are truly amazing) for a chance to win $1000. In the end, I didn’t win but we all decided that it was rigged LOL. The “highlight” of my night though was when someone from the balcony (I bet it was a Hawks fan) threw their beer onto the people sitting below and my friends and I received a free beer shower! We were all pretty shocked but I think we were mostly relieved that it wasn’t pee or puke. I’m still pretty mad that I have to wash my hair prematurely but I guess at the end of the day, its all part of the experience right?

After a very close and emotional game, the Hawks won 81 to 75 which was sad for us Sydney Swans supporters but the Hawks did play a very good game. I would definitely go again to see another game if I could. I had a really good time and my opinion on watching sports has definitely been changed. 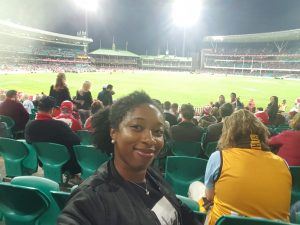 Me at the AFL match 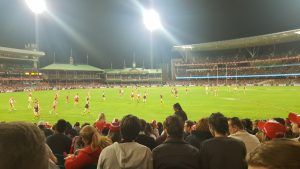 The players on the pitch