Last weekend I visited Kaikoura, which is somewhere I’ve been planning to visit for a while. However, getting there is a bit tricky at the moment thanks to the earthquake last November. Part of Kaikoura’s charm is its position on a thin strip of land between the Southern Alps and the Pacific Ocean but this means that there is only 1 road in from the north and 2 from the south. Landslides caused by the earthquake closed these roads and currently the only road access is via the inland road from the south, with work ongoing to reopen the coastal road and rail line.

6 months on from the quake there was still some noticeable damage to buildings around the town, but the main noticeable effect for me was the lack of people. Because of the road damage, Kaikoura is no longer on the main tourist route from the North Island ferry to the southern South Island so lots of tourists sadly bypass the town. I imagine this has greatly affected the people of Kaikoura as like many small New Zealand towns, Kaikoura relies heavily on tourists to support the local economy.

As well as its earthquake, Kaikoura is also put on the map by the plethora of marine life found off the coast. The plate boundary causes a deep underwater canyon over 1km deep which allows nutrient-rich water to rise fueling a diverse ecosystem including whales, dolphins and lots of varieties of  seabirds. The deep water in the canyon means that whales are found relatively close to the coast. Historically, whaling was a big industry in the area, but now the whales are the focus of tourism rather than hunting. Several species of whales are found at different times of the year, but male sperm whales are the most common year-round (the female sperm whales and their young are found in warmer waters in the tropics). Other species pass through the area whilst migrating to and from Antarctica.

On the second day of my visit I got up early to check in for a 7:15am whale watching trip. It had to be this early because the earthquake uplifted the coast by 1 metre at the marina (and up to 12 metres on other parts of the coastline!) meaning that boats can only be launched from the marina when the tide conditions are right. After a safety briefing we were bussed to the marina where we boarded the boat and headed off in search of whales. To find them, the crew only use their eyes and ears as using equipment like sonar can interfere with the whales’ echolocation and cause them to get confused and lost. The only fancy bit of kit is something caused a hydrophone, which is basically a microphone on a pole which is lowered into the water to pick up the sounds made by the whales and can pick up signals from them up to 8 miles away. The captain stops the boat and uses hydrophone to try and locate a whale, before moving to a new spot to try and get closer and pinpoint the whale’s location, whilst all the time the crew are looking out for the telltale spouting on the surface of the ocean. For the first few attempts there was no sign of any whales, they are in their natural habitat and have no obligation to appear for the tourists, although 95% of trips do spot them. Sperm whales come to the surface for 5-10 minutes about once an hour so when one was spotted we quickly rushed to get to it before it left the surface. Unfortunately just as we got close the whale dived down and we missed the photo opportunity but undeterred we carried on the search. A short time later another sperm whale was spotted at the surface and this time we got there in plenty of time. There was a sense of excitement among the passengers as everyone grabbed their cameras and rushed out onto the deck to watch the giant creature on the surface for a few minutes, before he gave us a photogenic tail flip and descended back into the deep. It was amazing to watch such a huge animal which was about as long as the boat we were on disappearing into the water so effortlessly. 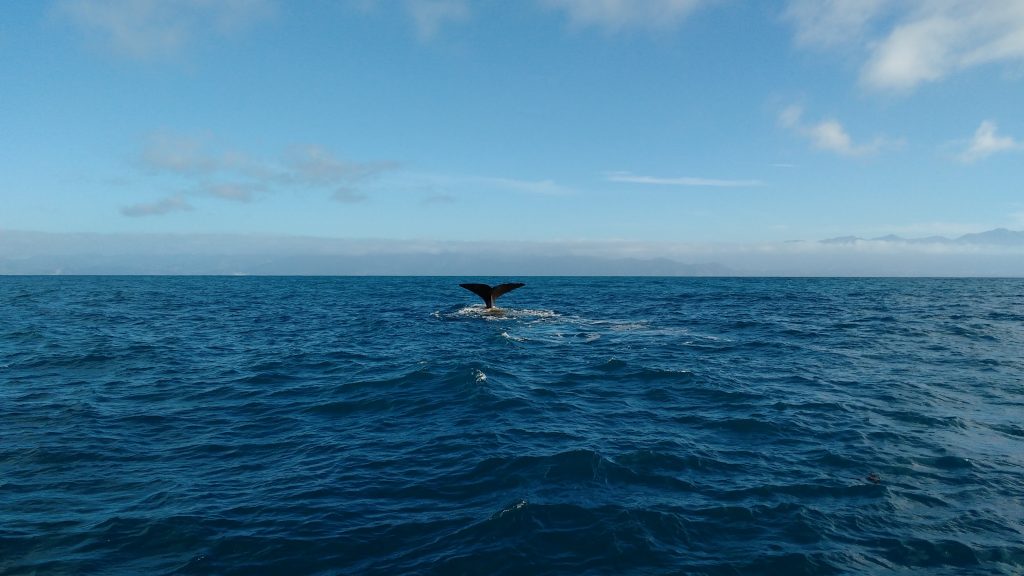 The sperm whale plunging back into the depths of the Pacific

As it had taken a while to find this whale, it was soon time to head back to shore. On the way back news came in that there were some humpback whales in the area, so the crew tracked them down and we took a detour to see them. We found 2 humpbacks who gave us a very impressive acrobatic display of flipping, breaching and spouting before we headed back to dry land. A few dusky dolphins also joined in the performance. 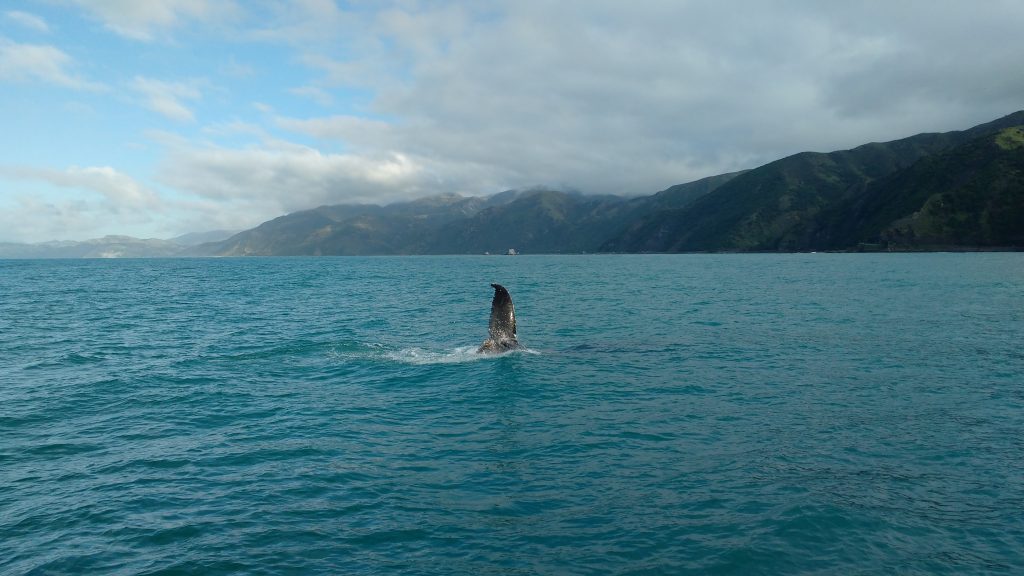 One of the humpback whales during the impressive display

New Zealand Fur Seals or kekeno are another common marine resident in the area. I went for a walk on the Kaikoura Peninsula, where they come ashore to rest on the rocks at Point Kean after fishing out at sea. The shore is covered in seals looking very relaxed, except for the occasional bark at a visitor who has got too close. The seals don’t seem to care too much about all the tourist facilities at the colony, there were several lying in the car park and on the footpaths. Another popular spot for seals and tourists alike is a waterfall about 20km north of Kaikoura where seal pups play in the stream under the waterfall, but unfortunately its not possible to visit at the moment because of the landslides blocking the road. 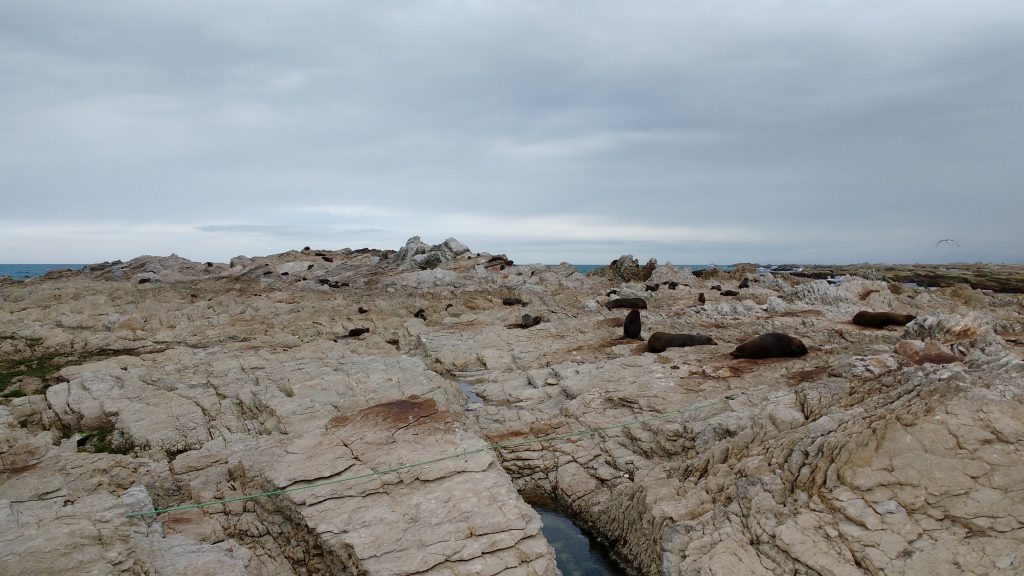 A large gathering of seals on the rocks 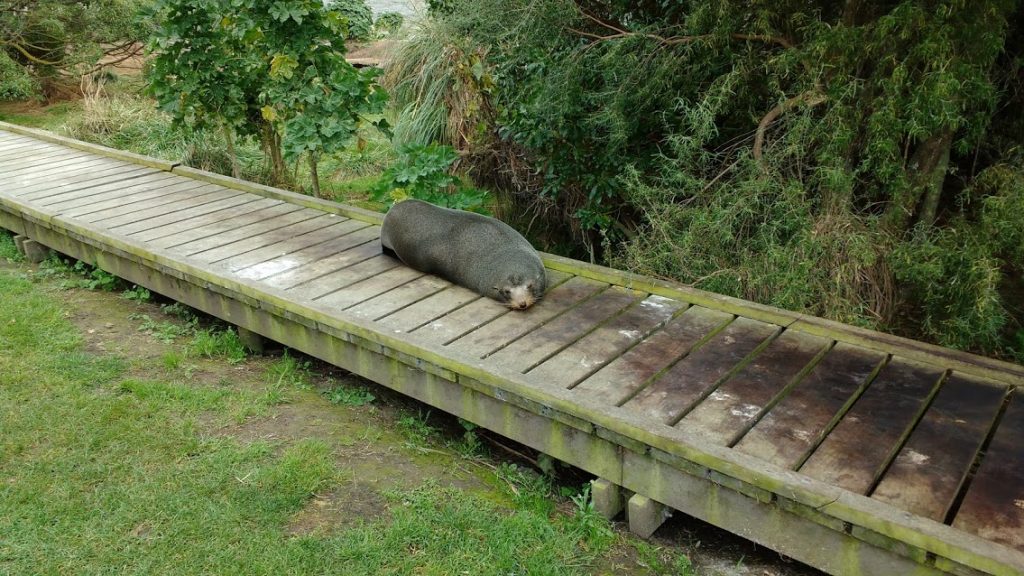 The peninsula also has beautiful views across the ocean and mountains, however it is very exposed as I discovered when walking along the clifftop path when the wind had just picked up and it started raining. After a brisk walk around the peninsula I went to shelter from the elements in the Kaikoura museum. Despite the weather being less than ideal for part of my visit, I enjoyed the trip and am glad to finally be able to tick Kaikoura off my New Zealand bucket list.