Posted by Yekaterina (France and Spain) in Study Abroad on September 17, 2017

It’s that time already, a new blog is here! So, I’d like to dedicate this blog to the city I’m studying in, ‘Avignon’ and i’d like to include some tourist attractions that I’ve taken part in and share a bit about the city and its culture.

Avignon is a a small city and is famously known as ‘the city of the Popes’ due to its impressive fortress ‘Palais des Papes’ which can be found in the centre of the city and was home to many Popes between the years 1309-1423. In addition to this historical landmark there are many others such as , ‘le Pont d’Avignon’ (the half bridge on the river Rhône) and ‘Rocher des Doms’ (serves to stop flooding of the river). Something that I found very interesting is that this city has been classified as an UNESCO world heritage centre… pretty amazing to be living in such a city really.

Our first stop is:

In my previous post I uploaded a photo of this magnificent building but I didn’t explain too much about the Palace. My first impression when seeing ‘Palais des Papes’ was just wow.. It’s very grand, to be able to get a good view of it you have to look up, down, left , right.. it’s not small. I remember seeing the architecture for the first time, the round windows the long stone staircases, the carving of the crucifix towards the top, it was all incredibly overwhelming (and a great place to get some good shots if you’re into photography like me!).

I have yet to venture into the Palace but I am sure there will be plenty of opportunities to do so in these 6 months. However, me being very curious about this historical landmark I asked my friends if they wanted to go and see the ‘Light show’. Basically, every day from the 12th August until the 30th September there is a 360 degrees light show performance inside the ‘Palais des Papes’ where they reflect different images onto the stone walls and talk about the history of the Palace. There is a talk in French and English, so if you’re a tourist and speak no French, it’s just as accessible! 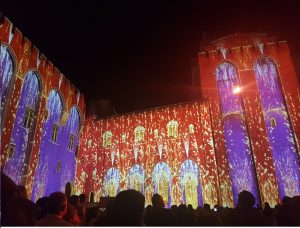 I loved it! It wasn’t boring, it didn’t drag, it was all quite the opposite because due to the lights there was always something to look at it, even the little children were shouting, ‘wow’ and gazing at the walls of the palace. If I had to compare it to something then it would be like watching a long firework display! I have attached some photos just so you can get a glimpse of what it was like as it’s hard to explain the beauty of it. 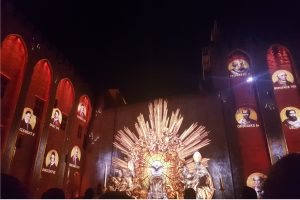 Yes, that’s right,  it’s just like those tourist trains that you can get at beach resorts in England. The train runs on wheels and drives you around the centre of Avignon. There’s commentary playing in French and headphones with around 7 different languages (English, Spanish, Russian, Japanese etc.) explaining the journey. I really enjoyed it, I remember that the day we rode the train it was about 37 degrees and I was too hot and tired to do anymore walking, so the train really helped me to explore more. It took us to some gardens just behind the ‘Palais des Papes’ and that was something I hadn’t known about and it was thanks to this train car that I’d been able to see the gardens and revisit them on foot. If you’re only in Avignon for a day, I highly recommend going on this! 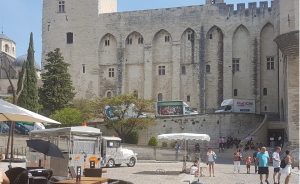 Here, you can see the train!

There is actually a very famous song about this bridge ‘Sur le Pont d’Avignon’ which was played to me in my French listening test at the end of my first week at the University, it’s quite catchy!  Anyways, this bridge is unfinished  and therefore you cannot cross it, it’s currently a tourist landmark and there’s an entry fee to go and walk on it (unless you go on the ‘Heritage day’ which happens to be this weekend where all the museums are free or at a reduced price). So in short, the bridge was built between 1177 and 1185 and forty years later destroyed , they tried to rebuild it but due to flooding, it was left unfinished. However, there is another bridge for cars and pedestrians so you can get to the other side and also a free boat which can take you across. I went with the Erasmus group to the other side of the river for a picnic in the evening. It was such a long walk from my residence but it was worth the sights. The bridge illuminated at night is beautiful, the water is so calming and the river span is very wide! Also, trying food from different countries (as each student had to bring some food from their country) was very nice! 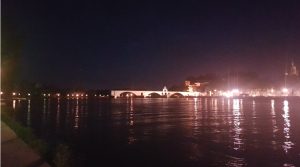 That’s it! I hope this mini tour has given you some insights into where I’m studying, it’s a lovely place and worth a visit! If you have any questions about Avignon, studying here or anything modern languages related in general, I’ll try my very best to help you!