Posted by Yekaterina (France and Spain) in Study Abroad on November 30, 2017

Last Thursday evening , there was a big festival here in Avignon called, ‘Millevin’. If you know the word, ‘vin’ you can probably guess that the festival is to do with wine 🙂

To be honest I wasn’t expecting such a big event. The main squares were all decorated with confetti and there were little wine stalls scattered around the centre. To try the wine you could buy 5 tokens with included a glass and then you could  exchange the tokens for samples of wine. I’m not really a wine fan but I tried two different sorts, I went more to experience the culture than to try the wine.

One of the squares had a tent up (photo below) which was heated , it was freezing outside so I was so relieved that that was there. Also, there were parades with music, people on stilts, bands playing etc. the city had so much life that night, I’d never seen it so busy!

We also chatted to many French, some were even kind enough to give us their unwanted tokens! It was a nice social event, felt very neighborly. I even managed to get interviewed by the radio station ‘France Bleu’, which was very unexpected but fun! and with Avignon being pretty small we bumped into many other students that we knew. 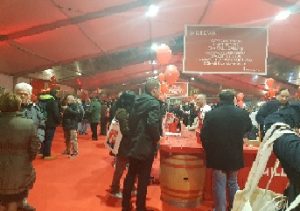 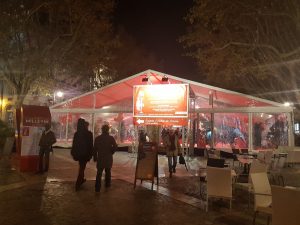