Trip to Segovia and Ávila!

Posted by Yekaterina (France and Spain) in Study Abroad on March 17, 2018 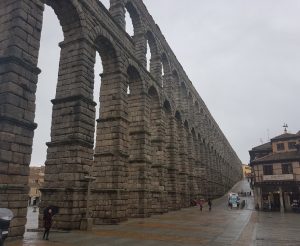 Last Saturday I spent all day travelling and exploring, as mentioned in a previous blog I went on a trip with the company, ‘Erasmus Trips Salamanca’. It was really well organised and I learned a lot about the city and the history of Spain.

I set my alarm for 6.30am Saturday morning, which was tough, but I made it to the bus station in time. The drive to Segovia lasted 2 hours (I basically slept) and when we got there it began to rain! It has been raining here an awful lot recently which is strange but I still enjoyed myself!😀 A tour guide took us around the city and explained a lot of interesting facts, normally I don’t follow tour guides too well in English never-mind in Spanish but the lady spoke very clearly and simply and I understood everything! The city is linked to the Royals, it’s very fascinating. I remember studying about ‘Los Reyes Católicos Fernando e Isabel’ (The Catholic King and Queen Fernando and Isabel) in one of my modules so It was easy to follow. We also went inside the ‘Alcázar de Segovia’ which is a museum, the palace where the King and Queen lived, the tour guide explained everything and it 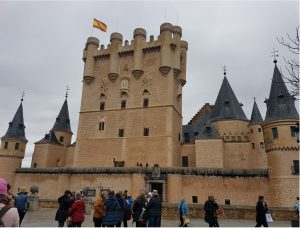 was amazing to have been in the same building as the Spanish Royals. 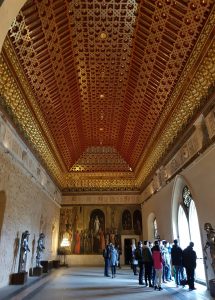 Then I had some free time to eat, buy souvenirs and explore but the time went by so fast and before I knew it I was on the bus to Ávila. It took us a hour to get there and when we arrived we walked around the walls of the city, similar to the ones in York. The weather perked up a bit and I walked so so much that I’d probably done about a weeks worth of exercise. Then we got back on the coach and arrived in Salamanca within an hour.

It was a really fun trip despite the rain but hopefully this crazy weather will go away soon..