Green Day is back and so am I!

So this week I’ve been quiet because I have just moved back to Leicester, and the process of getting unpacked and settled has taken longer than anticipated. It feels good to be back in Leicester after over a year away from the city I consider my home away from home and aside from a few […]

Stupid young people on the internet

The release of the wildly popular app PokemonGO has sparked a plethora of think pieces since its release in the UK just over a week ago. These think pieces follow the familiar theme that young people are ignorant, apathetic, and more concerned with catching Pokemon than with the plight of Syrian refugees (for example) or […]

What NOT to take on your year abroad

So those of you who, like me, are generally very keen and maybe even a little type A may have started packing if you have a year abroad coming up. If you haven’t, I’m sure you still have plenty of time! So with that in mind, I decided to make my next blog post about […] 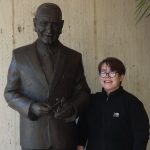 It’s the middle of the summer, which means no University to blog about, and my summer job means that I haven’t been doing anything all that interesting apart from work. So with that in mind, I decided to do something different and review a fantastic docu-drama I watched this past week.   The film, shown […]

Why I love Leicester

This past weekend I had a flying visit to Leicester to catch up with one of my best friends from University before she graduates and leaves me for good and to check out my house for next year with my housemates. Being back in the city that was my home for two of the three […]

What I wish I’d known before my year abroad

Posted by Courtney in Study Abroad on June 9, 2016

Ah, June 2015. It was a very different time for me, and I was working many hours every week at my retail job trying to save up as much as I could before I jetted off for America. If you’ve been a long time reader of my blog, you will remember my posts before my […]

It’s now been exactly a week since I landed back in England, and I still don’t feel able to do a retrospective post about my year abroad. It would be difficult to put down in words exactly what the people I met and the experiences I’ve had mean to me, and I hope that doesn’t […]

So this week has been a very emotional one, I’ve finally left Arlington and all the friends I have made there to return to my home in England. I am partially excited to return home, partially sad to be leaving the life I had made in the Metroplex behind and there has been almost as […]

So, at UTA it’s approaching the end of so called ‘dead week’. That’s what students here call the week before final exams when you feel, well, dead. Many professors stop teaching new material and opt for review classes instead, and others simply stop teaching their course all together. With all that being said it is […]